Unfortunately, during the past holiday we were unable to film as it had snowed. However, I was still able to research the correct costumes and props to use for the characters. The type of uncomfortable clothing I wanted the protagonist to wear is PJ’s (Pyjamas). This is because the storyline is introduced when the protagonist wakes up. She straight away finds herself in a forest, and wearing PJ’s in a cold forest is clearly uncomfortable.

I, and my teammates have decided to have pyjamas in the red colour. The pyjamas’ red colour will be used as a symbol throughout the film. It symbolises the protagonist’s terror and fear, but most importantly, it symbolises blood. The idea of blood will hint to the reader that even though the protagonist is not seen getting killed at the end of the movie, she most likely will. However, nothing is clarified at the end. This technique allows the audience to choose their own ending.

I have found those sort of red pyjamas for the protagonist to wear. The silk fabric symbolises the girl’s sensitivity (since silk is very soft and can easily get ripped in such an environment).

Our film very much follows the steps of The Hero’s Journey at the start. The hero(ine) starts by waking up from a bad dream. She then finds sweets on the floor which is her call to adventure. She follows the sweets to find herself suddenly in a forest. Withal, our film is not like an original Hero’s journey. The heroine in our film returns to where she started, however, she is yet haunted by that creature, and is yet the vulnerably character. 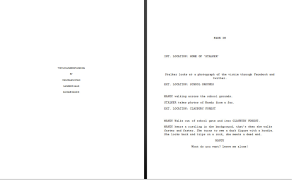 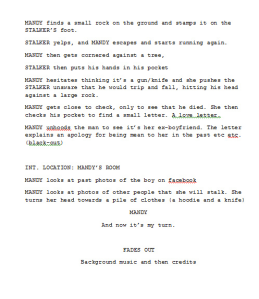 We then changed a lot of the storyline, so we decided to give it a new title considering how different it is.
Sweet Dreams Script Final

What you are looking at now is a blog by a student named Hamdaan Khan or more famously known as Shane. He lives in London, in the quiet parts of Chadwell Heath and studies at Caterham High School Sixth form. This blog of his contains very helpfully formatted information relevant to his A level's Media course.

The latest news on WordPress.com and the WordPress community.